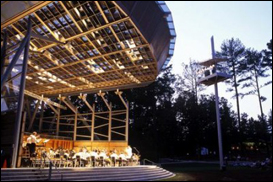 CARY, N.C. (CelebrityAccess MediaWire) — The Cary Town Council has signed an new contract with SMG, extending the company's management deal to operate the Koka Booth Amphitheatre for another two years.

SMG has managed the shed since it opened in 2001. The venue has yet to see a profit, but according to the Cary News, 2009 saw the smallest operating loss at the venue since it opened for business.

In 2009, Cary subsidized the amphitheatre's operations with a grant of $222,437, but $140,225 of the grant went unused, prompting city officials to describe 2009 as a "banner year" the Cary News reported. The town cites SMG as a contributor to this "windfall" after staging concerts that performed $90,000 ahead of budget and recommending that the town cancel programs that had proven financially unsuccessful in previous years.

The town has apportioned an operating subsidy of $210,067 for this year, but is optimistic that the actual financial support that the venue will need will be lower than in 2009.