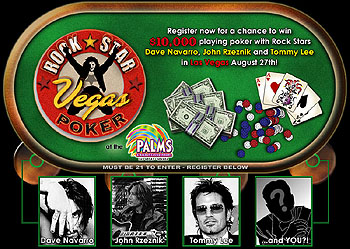 Riding on the popularity of the celebrity poker series on cable TV, the Las Vegas Convention and Visitors Authority (LVCVA) and Clear Channel Entertainment Properties have teamed up to produce the first Vegas Rock Star Poker Tournament and Sweepstakes. Set for August 26-28 at the Palms Casino Resort, the event will be headlined by rockers Dave Navarro, Tommy Lee and the Goo Goo Dolls' John Rzeznik. The top prize is $10,000.

Winners will be chosen from registrations at the tournament's official Web site — www.vegasrockstarpoker.com — and from winners of radio promotions in six cities – New York, Chicago, Houston, Phoenix, Los Angeles and San Francisco – described as “feeder markets” by Las Vegas. The sweepstakes began July 5 and continues through August 12.

Winners and their guests will play side-by-side with Navarro, Lee and Rzeznik. The weekend begins with a tutorial to get players game-ready, followed by a private "meet and greet" session and dinner with the rockers. After the tournament, the winners will attend an exclusive after-party in the infamous 2,900 square-foot, three bedroom Real World Suite at the Palms.

"Las Vegas sets a high bar for both excitement and originality," said Bruce Eskowitz, president of Clear Channel Entertainment Properties. "The LVCVA's clear view of the target promotions markets and the generosity of the Palms Hotel helped us assemble a strong mix of promotional vehicles to achieve their marketing objectives."

Clear Channel and Las Vegas are planning on producing two events per year, with the next one bandied about for early ’05.

No television rights have been secured for this year’s event, but McGaw says there is interest from Bravo, MTV and VH1 for the next round. – Jane Cohen and Bob Grossweiner