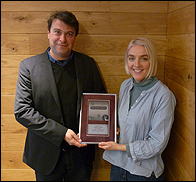 LONDON (CelebrityAccess MediaWire) — MERLIN CEO Charles Caldas has been named as the latest recipient of the IMPALA Outstanding Contribution Award which recognizes the efforts of an individual or organization to promote and develop European independent music and the sector’s diversity.

Charles’ has more than 20 years of experience in the independent music sector, including his long-term stint as the CEO of Shock Records, Australia’s largest independent music company, as well as positions on the Boards of ARIA, AIR and WIN.

On receiving the Award, Charles Caldas declared: "I care very deeply about the work that we do at Merlin, and am truly honoured that the leaders of our sector, whom I admire and respect immensely, have chosen to recognise that work in this way".

Helen Smith, Executive Chair of IMPALA commented: “Before 2008, it was all too common for digital services to consider independent music as something of an afterthought. Not any more. Charles’ tireless work with MERLIN has put our sector firmly on the digital map and helped ensure that the enormous value of our members' repertoire is recognised by those in the technology sector and wider music industry. Five years on, and for independent labels and independent artists it is difficult to imagine a world without MERLIN”. – CelebrityAccess Staff Writers