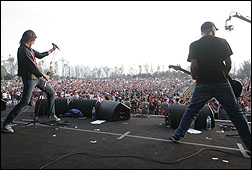 BEIJING (CelebrityAccess MediaWire) — Some of the biggest names of rock played last weekend at the Beijing Pop Festival in China, much to the surprise of many observers.

The-two day outdoor event was held in Chaoyang Park and featured both international and Chinese artists. Among those who took a turn on stage were Trent Reznor of Nine Inch Nails and Public Enemy, who went by the name PE while in China, apparently in an effort to appease Governmental censors, Marky Ramone, The New York Dolls (Sans drag) Japanese band Apache Train and others.

Another featured performer was Chinese rock pioneer Cui Jian, who has something of a radical reputation in China. The performer aroused the ire of Chinese authorities when he entertained students in Tienanmen Square during the 1989 student protests there. The subsequent crackdown left the performer banned from any large stage in Beijing until 2005 and even forced him into hiding at times. He has toured outside of China several times and even opened for the Rolling Stones when they went to China in 2006.

"We've tried to get Cui Jian on the bill before. He has been a tough permit for a lot of reasons, but this time we succeeded," the festival's British promoter Jason Magnus told AFP.

China's softening position on performers like Cui Jian likely comes in light as the government there attempts to buff their international image for the forthcoming 2008 Olympic Games. Observers put the attendance numbers around 15,000 fans. – CelebrityAccess Staff Writers