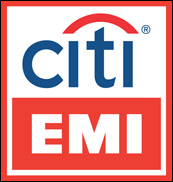 As a part of the acquisition, Citi completed a recapitalization of the company through a debt for equity swap. As a result, the company’s debt has been dramatically reduced by 65% from £3.4 billion to £1.2 billion, and the company has in excess of £300 million of cash available.

Terra Firma under Guy Hands, originally acquired EMI in May of 2007 for £4 billion at the height of the private equity boom. However, the company has since struggled with declining album sales and a massive debt load related to the acquisition. The deal, financed primarily by Citi, turned litigious last year, with Terra Firma unsuccessfully accusing Citi of inflating the bid price for EMI.

According to the Financial Times, Citi will look for a buyer for EMI, but a person familiar with the bank's plans said Citi isn't in a rush and the sale process could take upwards of a year.

EMI will continue to operate under the same management.

Roger Faxon, EMI’s chief executive, said: "The recapitalization of EMI by Citi is an extremely positive step for the company. It has given us one of the most robust balance sheets in the industry with a modest level of debt and substantial liquidity. With that solid footing, we are confident in our ability to drive our business forward. We have already made great progress in meeting the challenges facing our industry. The closer alliance between our two operating divisions is already delivering impressive results on behalf of the creative talent we are privileged to represent. We have a clear vision for the future, a strong and committed management team, and now the right capital and financial structure in place to deliver successful outcomes for artists and songwriters." – Ian Courtney