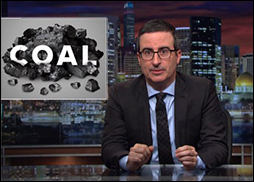 NEW YORK (CelebrityAccess) — The owner of one of the country's largest coal mining concerns is suing comedian John Oliver and cable network HBO over a segment on the coal industry on Oliver's “Last Week Tonight” show.

In the 24-minute segment, Oliver looked into the decline of the coal industry and President Trump's promises to restore the fading industry to its former glory. During the segment, Oliver singled out Murray Energy Corporation and chief executive Robert E. Murray, a vocal critic of President Obama and the former president's energy regulations.

During the segment, Oliver presciently noted that Mr. Murray had been actively litigious in the past and that when "Last Week Tonight" contacted Murray Energy for comment, an attorney representing Murray responded with a letter instructing Oliver to ‘cease and desist from any effort to defame, harass, or otherwise injure Mr. Murray or Murray Energy,’ and telling us that ‘failure to do so will result in immediate litigation.’”

Despite the warning, Oliver was undeterred and lambasted the coal magnate in the segment on Sunday night, comparing Murray to a “geriatric Dr. Evil,” and suggested that Murray valued profits over employee safety.

“Bob Murray, I didn’t really plan for so much of this piece to be about you, but you kinda forced my hand on that one,” Oliver said during the segment. “And I know you’re probably going to sue me over this. But, you know what? I stand by everything I said.”

On Wednesday, Murray kept his promise and filed suit against Oliver and HBO, alleging defamation, invasion of privacy and infliction of emotional distress as part of a “meticulously planned attempt to assassinate the character and reputation of Mr. Robert E. Murray, and his companies, including Murray Energy Corporation and those in West Virginia on a world stage.”

The suit further alleges that Oliver and HBO "did so for their personal and financial gain by knowingly broadcasting false, injurious and defamatory comments to HBO's approximately 134 million paying subscribers while knowing that their malicious broadcast would be repeated to countless more individuals through various outlets."

The plaintiffs in the case are seeking damages to be determined at trial, as well as a permanent injunction prohibiting rebroadcast and other unspecified relief from the court. – Staff Writers