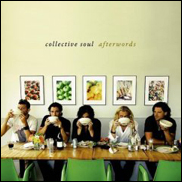 LOS ANGELES (CelebrityAccess MediaWire) — Collective Soul hits the road this Spring in support of their new album, Afterwords and looks forward to connecting with their devoted fans. The venues on this headline tour range from the House of Blues in San Diego to Borgata in Atlantic City. This tour provides fans with the opportunity to see the high energy, rock and roll that Collective Soul is known for, up close and personal.

The band is thrilled to have Josh Kelley join them on their Spring Tour.
Josh recently released his fifth album, Special Company. Green River Ordinance will support the first leg of the tour as the opening act and The Whitest Light will close out the Spring Tour.

While born in Atlanta, Georgia, Collective Soul has gained international acclaim during their impressive career. Nineteen songs have reached Billboard charts in the band's first seven years and seven of those made it to #1 on the radio charts. Collective Soul's latest CD, Afterwords, debuted in the Top 25 on Billboard's Album Chart and was a Top 10 album on itunes during its first week of release. The band's hit single Hollywood has been featured in American Idol TV commercials and their new single, All That I Know could be heard recently on ABC's Crime Drama, Women's Murder Club.