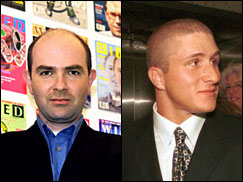 The event includes panels on the outlook for online and mobile music markets and the clash between technology and copyright laws. Speakers representing both parties in the peer-to-peer file-sharing case MGM v. Grokster make up a panel of legal and policy experts who will discuss views on how best to balance the competing interests of copyright protection and the promotion of technological innovation. The case, which has far-reaching ramifications for the future of peer-to-peer and online piracy, is set to be heard by the U.S. Supreme Court on March 29. If the plaintiffs win, distributors of peer-to-peer file-sharing software could face immense damage awards and/or court injunctions that would force them to cease distributing their software.

"Peer-to-peer and mobile developments will be at the heart of discussions at this year's forum," says Ned Sherman, CEO of Digital Media Wire. "I am excited to line up industry-leading authority topics such as developments in legal peer-to-peer issues, the Supreme Court's review of MGM v. Grokster and technological development in regards to positioning the mobile phone to become the key device for music to be digitally accessed and distributed. This is going to be one of the most important years for the future of music and these events are likely to shape the industry for years to come."

Confirmed panelists at the conference include:

LOS ANGELES (CelebrityAccess MediaWire) — The 'Uplifting Minds II Conferences' entertainment business seminars were a sellout and the talent at the competition showcase rocked the Westfield Shoppingtown Fox Hills mall this past weekend. For five years now the event has developed young talent's minds, as well as their spirits.

Winners of the talent competition were 14 and 16 year-old Gee Gee & Charm (a singer and rapper) who won the music category performing a number they wrote called "It's A Girl Thang" and 19 year-old singer J Miss who won the song writing category with a song she co-wrote titled "True Love." Both will receive a promotional/marketing package worth $5,000 and international CD distribution from Boosweet Records; free studio recording time, free track, CD packaging and duplication from Ivory Pen Entertainment; option of a management contract with Jaedd Music Group; a copy of "The Business of Music for the Christian and Gospel Industry" by Grammy Award winning and platinum producer/song writer Alvin Williams; vocal coaching sessions from Superstar Entertainment; free DVD demo from Chereese Records; artist development session from Missing Link Consulting and four life coaching sessions from Dr. Jamie Ballard, Ph. D.

Judges at the competition were syndicated radio host of RadioScope and president of EURWEB ,Lee Bailey, who gave very honest and on-the-mark advice and criticism; Jasmine Diaz of Jaedd Music Group; entertainment attorney Richard Jefferson, Esq.; comedian/actor Kel Mitchell, co-host of Viacom/KCAL's Dance 360, who had the crowd hyped and laughing with his lovable personality. Rapper/actress Bombay ended the event with a performance that also included her entourage of dancers.

Uplifting Minds II Conference will return to Los Angeles in June, but for now the next date will be April 16-17 in Baltimore where Bryan Leach, V.P. of TVT Records (home to Lil' Jon and the Eastside Boyz) and Mike Washington, the east coast director of artist development at Island Def Jam Music Group, will serve as judges. Rapper COMP (Def Jam Records) will end the event with a performance. –by CelebrityAccess Staff Writers

On the Web: The Uplifting Minds II Conferences