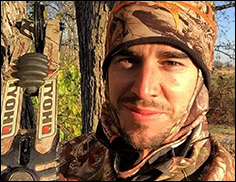 KAW CITY, OK (CelebrityAccess) — Country music singer Craig Strickland, frontman for the group Backroad Anthem, has been found dead after his boat capsized while hunting during a powerful winter storm.

Strickland, 29, had gone duck hunting with a friend, Chase Morland at Kaw Lake in Oklahoma as a powerful winter storm system hit the region, with winds gusting as high as 45 mph. Morland acknowledged the danger of hunting in the storm, tweeting:

"In case we don't come back, @BackroadCRAIG and I are going right through Winter Storm Goliath to kill ducks in Oklahoma. #IntoTheStorm."

In a Facebook post Monday, the band said that Strickland appeared to have "fought his way from the water to a hill and was lying in the shape of a cross on his back."

Morland's body was found two days later and his cause of death was determined to be drowning due to a capsized boat, coupled with exposure, the Oklahoma Chief Medical Examiner's office said.

"Today we lost our brother, our best friend, our bandmate. Craig was the most amazing person whose passion for life couldn't be matched," Strickland's bandmates said in their Facebook post.