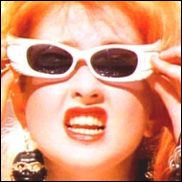 LONDON (VIP-NEWS) — Having burst onto the world stage as the quintessential girl who wants to have fun and after more than 20 sterling years and global record sales in excess of 25 million, Cyndi Lauper has proven that she has the heart and soul to keep her legion of fans compelled by her every creative move with world famous hits such as Girls Just Want To Have Fun, Time After Time, True Colours and I Drove All Night.

With her recently released, newly minted collection, "Bring Ya To The Brink," Cyndi firmly asserts her position as one of the most beguiling, innovative, and downright exciting recording artists of this — and or other — generation. Cyndi Lauper has been nominated for 13 Grammy Awards, 2 Emmy Awards, 2 American Music Awards, 7 American Video Awards, 18 MTV awards.

But it's as a master craftsman of her own recordings that give Cyndi her greatest sense of accomplishment. With Bring Ya To The Brink, she has raised the creative bar, hitting what is destined to mark another career watermark of success.

"I still have so much to say and share," says Cyndi. "I'm grateful for each and everyday that I get to make music. As long as there's a corner of the world where people want to hear me, I'll be there, singing my heart out."