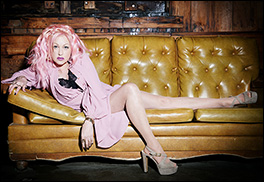 RALEIGH, NC (CelebrityAccess) — Cyndi Lauper, long a vocal ally of the lesbian, gay, bisexual, and transgender community, has announced that she's turning her June 4th concert in Raleigh, North Carolina into a fundraising event to support the repeal of the state's Public Facilities Privacy & Security Act.

Lauper said that she will be donating all of the profits from the concert to Equality North Carolina's efforts to repeal HB2 and that her manager and agent were joining in by donating their commissions from the show as well.

In a press statement, Lauper said: "Sadly, once again, the civil rights of lesbian, gay, bisexual, and transgender people have been trampled on with the recent passage of HB2 in North Carolina. Me and my team at the True Colors Fund have been closely monitoring the situation in North Carolina and support the efforts of the Human Rights Campaign, Equality North Carolina, and others to repeal HB2 in the upcoming legislative session. The pressure to repeal HB2 is building and it is beautiful.

"In the dark haze of such oppression, people and companies are stepping up to fight back against this unjust law and ensure that all North Carolinians are treated with dignity and respect, especially the transgender community. I have seen time and time again what can happen when people join together to do what is fair and the effort to repeal HB2 is the right and fair thing to do. I am hopeful that all of the current efforts to repeal HB2 will be successful and the True Colors Fund and I will continue to do all that we can to help." – Staff Writers