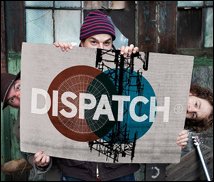 Tickets went on sale this past Friday to fans who had signed up on the band’s website to receive a special pre-sale password.

After four days, two additional shows have been scheduled in Denver, two in Boston, and one additional show in Chicago and New Jersey/New York.  The band also added a previously unscheduled stop in Los Angeles to satisfy fan demand.

Tickets are still available through the fan pre-sale which continues up until the general public on sale on Friday, January 28th.

In New Jersey, where Dispatch will roll into two inaugural shows at the 25,000 seat Red Bull Arena stadium, their New York/New Jersey area promoter Bowery Presents Partner Jim Glancy said, “The pre-sale results are another stunning achievement from Dispatch and their fans.  It is impossible to overestimate the power of their music and the passion of their fans.”

Dispatch hasn’t been active since 2007, when they played three consecutive sold out shows at New York City’s Madison Square Garden, selling a total of 60,000 tickets in all.

In November, the band launched Dispatch It!, a special feature on their website which enabled fans to upload photos and videos of their favorite Dispatch moments over the years.

On January 1, the band announced that they would give their entire studio album catalog away to any fan that followed a few simple steps – including friending Dispatch on Facebook, following them on Twitter, and sending five friends an email about the tour.

Thousands of fans took advantage of the offer, made possible because Dispatch owns the digital rights to their entire album catalog.

This summer the band will roll out their Amplifying Education campaign, which will focus on educational issues here in the United States. A portion of the proceeds from each ticket sold will go to benefit education in each local market, and the band is planning additional programs to spotlight education in every market they visit.