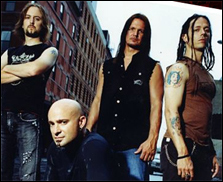 BURBANK, CA ( CelebrityAccess MediaWire) â€“ The hard rock band Disturbed will hit the road for a series of tour dates that lead up to the June 3rd release of forthcoming album, "Indestructible." The tour kicks off on April 26th in Little Rock, Arkansas at Edgefest, and criss-crosses the country for three weeks before concluding at the Rock on the Range festival on May 17th in Columbus, Ohio.

This summer, Disturbed, which also features guitarist Dan Donegan, drummer Mike Wengren, and bassist John Moyer, will co-headline the Rockstar Energy Mayhem Festival — a riotous road show featuring some of hard rock's most influential artists. Disturbed will join Slipknot, Dragonforce, and Mastodon on the mainstage. The band recently visited U.S. troops in Kuwait where they performed as part of Operation MySpace — a special concert event for those serving in the Middle East — which was viewed by over 3 million via MySpace's live simulcast.