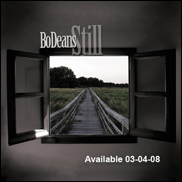 MILWAUKEE, WI (Hypebot) â€“ Roots-rockers the BoDeans have jumped on the D.I.Y. bandwagon with strong initial results. After nine records on various major and indie labels over 20 years, the band decided to form their own label, He & He LP, to put out their new album "Still".

Released on March 4th, "Still" debuted in the Billboard Top 200 and at #30 on the Top Independent Albums chart. The record's first single, "Everyday," has also landed in the top 10 on the Americana charts, and is one of the top 3 most-added songs at Triple A radio. The band may have done it themselves, but their campaign is traditional including retailers like Best Buy and Target and a six-week nationwide radio and retail promotion tour. An upcoming headlining tour will also support the album.

To "run" the label, the BoDeans have put together a team of indie firms like OarFin, Koch, Under The Radar, Songlines and Moxie Star to handle various aspects of distribution, radio promotion, publicity and marketing with the band itself in control. Other established artists like Over The Rhine and Michelle Shocked have chosen a similar team approach for their recent releases with impressive results.