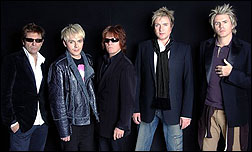 Argent Mortgage Orchestrated, the new concert series produced by Elevation Entertainment which pairs popular recording artists with symphony orchestras in "one night only" engagements, has added Duran Duran to the series. Duran Duran will be accompanied by the Orlando Philharmonic Orchestra on July 18 at the Chapin Theater at the Orange County Convention Center in Orlando, FL.

The concept of Argent Mortgage Orchestrated is to present contemporary artists in the opposite environment of the critically acclaimed "MTV: Unplugged" format. Instead of stripping music down to the core, the series will offer artists an unconventional opportunity to perform their songs in ways that they choosewith the full backing of some of America's finest symphony orchestras. Each concert will be a "one night only" engagement and staged in intimate concert facilities. Argent Mortgage, a leading national mortgage lender in the U.S., sponsors this unique concert series.

"This is a very exciting opportunity for the band and our fans," commented Duran Duran bassist John Taylor. "Performing our music in new arrangements with the backing of the Orlando Philharmonic Orchestra will not only be a unique and interesting evening for our fans, but I suspect also a tremendously gratifying experience for us as a band."

"Duran Duran has an incredible following and we are pleased to bring them together with the Orlando Philharmonic Orchestra as part of Argent Mortgage Orchestrated," said Jeff Gillis, executive vice president of operations for Argent Mortgage. "The Orchestrated program is about bringing two distinct sounds together to create a new cohesive performance. It's a great fit for Argent since we work hard everyday to enhance the performance of independent mortgage brokers in an effort to better meet the mortgage financing needs of consumers across the nation."

Duran Duran has selected world renowned composer and arranger David Campbell to arrange and orchestrate the band's songs for this performance. Campbell, born in Toronto and raised in Seattle, has performed and/or worked with many artists including: Bruce Springsteen, Linda Ronstadt, Jackson Browne, Marvin Gaye and Bob Dylan. Internationally acclaimed conductor, composer and arranger Frank McNamara has been chosen to conduct this show. McNamara, a native of Ireland, has a lengthy and impressive resume including work with the Irish Tenors, the American Tenors, The Who's Roger Daltry, Jeffrey Osborne and others. This past November and December, McNamara arranged and conducted the LeAnn Rimes Orchestra Christmas Tour. –Bob Grossweiner and Jane Cohen