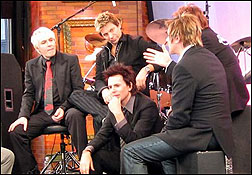 PROVIDENCE, RI (CelebrityAccess MediaWire) — Widely known as an "eighties" band, Duran Duran has been working and releasing records in some form since 1979.

The band, originally formed as a New Romantic group has been through personnel, style and wardrobe changes like few others. Leaving us with memorable hits like "Rio" and "Hungry Like The Wolf" and "View to a Kill" (The only James Bond theme to chart at #1 in the US), the band had largely faded into obscurity.

Then, in 2001, when the original lineup decided to reunite, things seemed to be looking up for Duran Duran fans everywhere. They worked on new material, shows sold out in mere minutes, including 5 straight sold out dates in the massive Wembley Arena in 2004. They landed a four record deal with Epic, they had a top ten hit in the UK with "(Reach Up For The) Sunrise", what could stop them now?

Internal conflict, that's what. Last Wednesday, guitarist Andy Taylor split with the band, stating that an "unworkable gulf" had developed.

Taylor had always been the driving force behind the heavier rock influences in the band and his collaboration with Timbaland and inviting Justin Timberlake to sing guest vocals on some of the new material were reportedly "Really where the cracks started" band member John Taylor told the Providence Journal.

The band intends to soldier on though. They have started work on a new album, including the collaboration with Timbaland. No date for release has been set. – CelebrityAccess Staff Writers