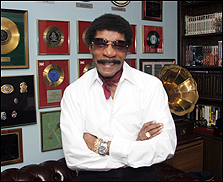 BOSTON (CelebrityAccess) — After decades of legal battles stretching back to 1969, the Estate of Herb Reed, one original members of the seminal soul & doo-wop group The Platters, has finally regained control of the rights to the bands' name.

Last week Nevada-based United States District Court Judge Miranda M. Du issued an injunction against Larry Marshak and Florida Entertainment Management, barring them from using The Platters name. The judgement was the latest in a string of injunctions in favor of Reed, with other cases being decided against Paul Robi's widow Jean Bennett, Monroe Powell and the World Famous Platters out of Branson.

The Platters, thanks in part to their extensive changing line up over the years, become one of the most contested names in the world of oldies music. According to longtime oldies agent and music researcher Cord Cosler, president of Celebrity Direct Entertainment in Florida, "At one time, there were almost 200 groups of ‘Platters’ playing around the world.”

"Reed felt he was the victim of a form of identity theft,” said Sommers in a press statement. "Herb was adamant that he needed to regain control over performing rights to The Platters’ name in order for the historical impact of the vocal group’s timeless music to evolve after stagnating for 50 years and be able to appeal to new generations of music fans, thereby ensuring and protecting his legacy."

"Herb was so happy he literally broke down and cried," added Balboni, recalling the moment that he told Reed that the band's name had been returned to him.

In conjunction with the's legal victory, estate manager Fred Balboni announced the release of a new album, the first official Platters release in 50 years. The "Back to Basics with The Platters Live" album is a 10-song LP recorded on the You Dig It label, which will be available on Feb. 14th via iTunes, Spotify, Google Play, Amazon, Beats, Rdio, Deezer, Tidal and YouTube Music Key. – Staff Writers