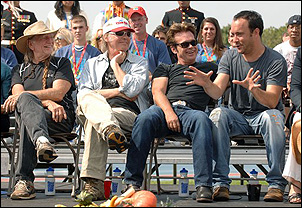 Randall's Island, a small strip of land in the East River may seem like an unusual place to stage a festival to benefit American family farms. Festival organizer Willie Nelson addressed that issue during a press conference before the event, telling reporters that "Some people thought that bringing Farm Aid to New York was a bold move, nut there is good reason to invite urban Americans to appreciate the tastes of food grown close to home. People can keep family farmers on the land with their good food choices."

By all accounts, the concert remained fairly free of politics with just a few comments from Neil Young and John Mellencamp. That appeared to be a winning strategy with seemingly restive fans. According to a review in Billboard, the insinuation of political content was met with disapproval by fans, with Mellencamp reportedly being booed by a few fans, during his anti-Bush rework of "To Washington" and Neil Young being told by a boisterous audience member to "just sing, Neil" when he was addressing the crowd about the importance of supporting family farms.

Despite these isolated incidents, the fans were reportedly well-pleased by the musical fare, mostly of the acoustic variety with board members, according to the Billboard review frequently joining other performers on stage.

The show will serve as good warm up for Young who is preparing to head out for a tour of the US this fall in support of his new album, "Chrome Dreams II," which is due in stores this October. – CelebrityAccess Staff Writers