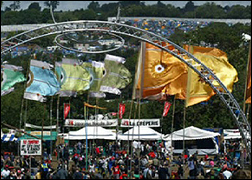 LOS ANGELES (CelebrityAccess MediaWire) — Despite the grim economic times, the producers of many top festivals are reporting that their ticket sales are on pace with previous years.

Major promoters in the UK and the US have all come in with some positive news in recent weeks. Major UK festivals such as Glastonbury and the Reading & Leeds festivals have reported sell-outs while AEG has been seeing strong ticket sales at most of their domestic fests and a return of many of their major sponsors from previous years.

"We're not feeling it yet," AEG Live CEO Randy Phillips told Billboard. "I'm not saying we won't eventually, but the festival business is tremendous value for the money in terms of the show and what you get."

Many promoters have been taking aggressive steps in the face of the tough times to drive ticket sales. AEG has been offering tickets through a lay-away plan and at reduced prices that help to ameliorate the expense of tickets for budget-conscious festival-goers. According to Phillips, the plan is paying off and he told Billboard that approximately 24% of tickets to this years' Stagecoach festival were purchased on the layaway plan and that sales overall were exceeding last year's pace.

Some promoters have responded to the challenge by brokering exclusive appearances by major artists such as B'estival producer Rob Da Bank. "Budget-wise we're going up. There are two ways of looking at it, either you go for the best line-up you can and hope you sell at least as many tickets as last year, or you scale back, cut your budgets and try and scrape through." Da Bank told the BBC's 6 Music. B'estival will be the only summer festival to see Kraftwerk and Massive Attack this year.

Other festivals have responded by slashing ticket prices. The Edgefest in Toronto cut $38 from the price of advance tickets but are still expecting a lower turnout than last year while the Essence Festival in New Orleans has knocked 10% off tickets for group sales to certain targeted customer demographics.

Not all the news is upbeat and many festivals are bracing for lower turnouts. AEG's Rothbury festival is facing a challenging second year and according to Billboard, ticket sales are running behind by as much as 25% from 2008. "That's the one we knew was going to struggle, because it's in Michigan and you have so much unemployment," AEG's Randy Phillips told Billboard. "Even in a tough economy, you're not really going to be able to market your way out of it. It really becomes one of price sensitivity and the roster."

"We're setting our expectations where we understand that it's a very challenging economy out there," Superfly partner Jonathan Mayers told Billboard, "so we're not taking anything for granted." – CelebrityAccess Staff Writers