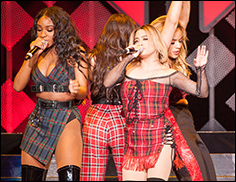 MIAMI, FL (CelebrityAccess) — Members of the Miami-based girl group Fifth Harmony announced that they are going to take a break.

“After six years of going hard, non stop, we also realized that in order to stay authentic to ourselves and to you, we do need to take some time for now to go on hiatus from Fifth Harmony in order to pursue solo endeavors,” a spokesperson for the group wrote in a post on their social media.

The group is currently constituted by four members — Ally Brooke, Dinah Jane Hansen, Lauren Jauregui and Normani Kordei. However, Fifth Harmony started out as a quintet when they debuted in 2012 on Season 2 of televised talent show “The X Factor.”

Camila Cabello, the group’s fifth member, announced that she was departing from Fifth Harmony in late 2016.

“We are all very excited and grateful to be able to take this time to learn and grow creatively and really find our footing as individuals,” Fifth Harmony said Monday. “In doing this we are allowing ourselves to gain new experiences, strengths and perspectives that we can bring back to our Fifth Harmony family.”

The remaining members of the group stated that they intend to honor their remaining touring commitments as a group through the rest of 2018. Scheduled shows include May 11th at the Seminole Hard Rock in Florida; May 13th at Centro de Convenciones de Puerto Rico in San Juan, Puerto Rico; and Laugardalshöllin in Reykjavik, Iceland on May 16th.