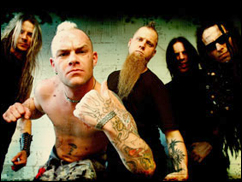 "Hey everyone, we regret to inform you all that all of FFDP's current tour dates have been cancelled. Read the message below:"

"Due to concerns regarding vocalist Ivan Moody's throat, Five Finger Death Punch has cancelled all live performances through March 7th. Ivan has developed calluses on his vocal chords that, if left untreated, could lead to permanent damage. As a preventative measure, he has been advised by doctors to take 2 months of vocal rest and work on rehabilitating his vocal chords. All are confident that Ivan will make a full recovery and be back in top form in plenty of time for Five Finger Death Punch's slot on the Mayhem tour with Slipknot and Disturbed this summer."

"The band offers sincere regrets to fans in the markets that they will not be playing, and promise to make all efforts to get to those cities during one of their many upcoming outings. Five Finger Death Punch will miss their entire planned outing with CHIMAIRA and All That Remains in February and March and the following upcoming headline dates in January…"

"Fans who have already purchased tickets to these FFDP headlining dates can contact their local box office in the next coming weeks about rescheduled dates and/or refunds. The whole band thanks fans for their continued support of their album – The Way Of The Fist" – CelebrityAccess Staff Writers