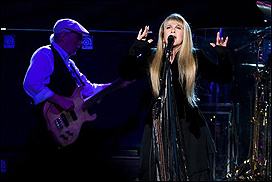 Speaking to BBC 6 Music, the drummer said the band had written three new songs, which they plan to play on stage this year.

He added the songs would be released online and hinted the recordings could be part of "a long-term plan" to release a new studio album.

The band's last studio album, Say You Will, was released in 2003.

Fleetwood said he had written some songs with guitarist Lindsey Buckingham six months ago as "a calling card" for singer Stevie Nicks.

"We wanted her to know we wanted to make some new music and we had some great songs," he said.

"But her mother died not too long after and it wasn't the time for her to do any singing, so we dropped it."

"Then recently she's sung on three of them and recorded one original song of hers, so we're going to mix these songs down and there'll be something that we will play hopefully on stage."

Beginning in April with 34 dates in the US, it will move over to Europe in the summer and the UK in September and October.

The band's 1977 album Rumours re-entered the UK album chart on Sunday at number three after a special deluxe edition was released to mark the 35th anniversary of it topping the UK charts.

It contains some of their best-known hits, including Go Your Own Way and Dreams.