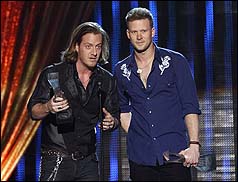 According to the Salt Lake Tribune, Country Explosion LLC, the promoter behind the Country Explosion Festival, filed a lawsuit against Florida Georgia Line and the band's show manager Troy Johnson, seeking $15 million in damages and penalties.

The complaint filed in the case alleges that Country Explosion LLC provided Florida Georgia Line with a $205,000 check on July 20, but asked that they delay cashing it for three days. However, despite agreeing, the complaint claims, Troy Johnson allegedly deposited the check the following day.

"As if adding insult to injury, on July 22, 2014, Johnson announced by email to the William Morris Agency Nashville and to other artists and booking agencies in Nashville, that the check had bounced, making Country [Explosion] absolutely toxic among the artists and booking agencies in Nashville," an Attorney for Country Explosion LLC wrote in the complaint. "This has also had repercussions in the entertainment industry around the whole country."

As a consequence, of the email, the complain claims, Country Explosion LLC has since been unable to book artists.

In an email response to the Salt Lake Tribune, a spokesperson for Florida Georgia Line wrote:

"We are disappointed to learn of the lawsuit filed by Country Explosion, LLC in Utah yesterday. We have attempted in good faith to resolve this dispute without resorting to litigation. However, Country Explosion’s defensive, and factually creative filing cannot change the fact that Country Explosion remains in breach of its agreement and still owes Florida Georgia Line a significant amount for their Sunday night performance at the 2014 Festival, which the band performed for their fans despite not being paid as contracted.

We intend to pursue our claims aggressively and believe the truth regarding Country Explosion’s actions and inactions, and the factual inaccuracies in their complaint, will be clear as the litigation proceeds." – Staff Writers