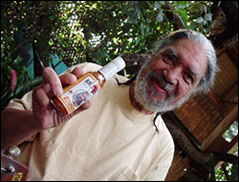 LOS ANGELES (CelebrityAccess) — Bruce Langhorne, a regular in the New York folk revival of the 1950s and 60s, and the inspiration for Bob Dylan's “Mr. Tambourine Man,” has died. He was 78.

According to the Los Angeles Times, Langhorne died at his home in Venice, California from kidney failure.

A native of Florida, who moved to Spanish Harlem, in New York City with his mother, he took up music at an early age, developing a unique style of playing the guitar after losing three fingers on his right hand in a fireworks incident.

His first known recording was in 1961 with Carolyn Hester, through which he met Bob Dylan. He would later record with Dylan, including The Freewheelin' Bob Dylan, and in 1965 was one of several guitarists on the album Bringing It All Back Home. Other Dylan hits that include Langhorne on lead guitar include "Subterranean Homesick Blues", "Outlaw Blues", "Bob Dylan's 115th Dream" and "Maggie's Farm".

In addition to his folk music work, Langhorne composed music for film, including the Peter Fonda western "The Hired Hand", the 1973 sci-fi film "Idaho Transfer" and the 1976 film "Fighting Mad."

In the 1990s, Langhorne launched his own hot sauce brand, Brother Bru Bru's African Hot Sauces unique for its inclusion of "African spices."

In 2015, Langhorne suffered a stroke that robbed him of his ability to play guitar and left him in hospice care.

He is survived by his wife, Janet Bachelor. – Staff Writers