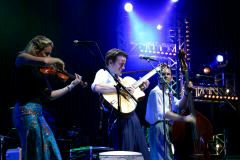 The 2002 Craponne Festival in France at the end of July, drew record crowds of 18,000 people over the three-day event, an increase of 20% from last year.
Some of the performers were Lee Roy Parnell, Jack Ingram, Hot Club of Cowtown, The Hackberry Ramblers and Guy Clark. There were acts from France, Europe and the United States represented.

Georges Carrier, president of the festival committee was delighted with the result. "It is wonderful to see that after 15 years, we have now established this event as the biggest music festival in France," he said.

For the first time, Georges Lang of RTL, (the largest radio station in France and well-known throughout Europe and to labels in Nashville) brought a crew to record the artists. A portion of Lee Roy Parnell's performance was also broadcast live.

This year's event also drew many surprise dignitaries in high political positions, some of whom flew in by helicopter from their Paris headquarters to check out the event.

Trisha Walker-Cunningham, who has represented the festival in Nashville for the past eleven years and attended the event said, "The organisation was impeccable and the sound was perfection. Georges Carrier and his team of wonderful people left nothing to be desired. Everything ran like clockwork and all the artists had a super time with great audience response. It's gratifying to know that this event now holds the attendance record for any music event of its kind in Europe."

"Every year, we try to bring acts who are diverse in music styles," she added. "Each act we had this year was superb. Perhaps the most interesting were The Hackberry Ramblers from Louisiana, who closed the festival with a 'Cajun party.' What makes them so unique are their ages. The oldest member is 92 years old, another 89 and the youngest 50 years old!! Having them perform was truly memorable. With some of them being together since 1933, you can imagine the stories that they had to tell about the music industry. It was a wonderful experience that I will never forget."

The Craponne Festival is a non-profit event. Any profits are put towards the following year's festival, thus enabling it to grow year by year. The Festival is held in one of the most picturesque and historic parts of France–the Auvergne. The village of Craponne itself celebrated its 1000th anniversary last year!