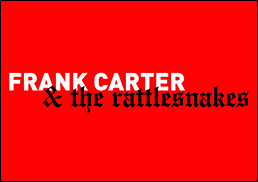 "Having cancelled four weeks of touring in Europe to focus on figuring out some problems in my life, I had hoped that it would be sufficient enough time to get myself in a good space to then get back on the road," Carter wrote in a post to his social media.

"The reality is, some things take time. The situation I am in is progressing towards a positive resolve but as I don't know when that will be, regrettably we are going to have to CANCEL OUR SHOWS IN NORTH AMERICA in October so that I can spend my time here with my family to make sure that progress is made."

Carter was quick to add that the cancellation shouldn't be seen as a bad omen for the band.

"Tour is a beautiful, powerful outlet for artists like myself, it is also a time capsule. An alternate reality that you can only truly begin to understand when you exist inside it… and the very existence of it means you hit pause on all other realities when you are on the road. Sadly I have hit pause too many times on real life and now I am having to face the results of those decisions," Carter wrote.

"So for now, it is time to pause touring and allow myself the time to figure out what is happening in the real world I occupy with my family."

At present, the band still has a string of performances scheduled in the UK in November and early December.