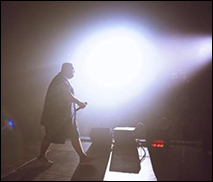 "I can not apologize enough for the sudden cancellation of recent shows. I'm dealing with some serious health and emotional issues that needed attention asap. Attempting to work through my problems was not going over and I had to stop everything b4
things got worse. Failing to make better choices and never taking a break in 20 years of intense touring has finally caught up to me. I need to get better b4 I can return to making people laugh and smile. I applaud my management for doing their best to protect me but my fans need to know the truth. Fluffy is fine but Gabriel needs help," he wrote in a post to his social media.

The explanatory post, as limited as it was, followed on the heels of a cryptic message posted a few days before that said "The problem with going down the wrong path is sometimes you take people with you. I'm not where I need to be but I'm refocused and hopeful." The post was accompanied by an image showing Iglesias and three other people descending a flight of stairs.

The comedian was in the midst of his “FluffyMania World Tour: 20 Years of Comedy” tour. – Staff Writers