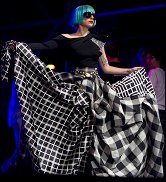 NEW YORK (VIP NEWS) — The 25-year-old pop superstar has just completed her 'Monster Ball Tour' after first setting out on the road in November 2009, but she intends to start rehearsing for her next run of concerts at the end of the year.

When asked what her tour plans are for the future, she said, "I do have plans, it will be at the top of next year but I have to begin rehearsing by the end of this year. That's what I do. It's time for another marathon."

Gaga's latest album 'Born This Way' has topped the charts in over 20 countries but she insists she isn't worried about peaking too soon in her career.

If anything, Gaga says her ambition is to follow it up with an ever bigger and better record, because she wants her career to be a "marathon" instead of a sprint.

She added to BANG Showbiz, "If you're running a marathon, and you're about to cross the finish line, you don't stop and say, 'Oh, once I cross it, it's over.' You run as fast as you can to get there as quickly as you can. So I guess, for me, it's about how many marathons can I run? How many dreams can I make true? Now, not for me, but for my fans."