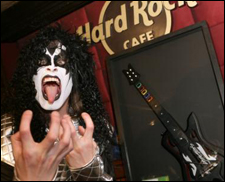 NORTHAMPTON, UK (CelebrityAccess MediaWire) — On Wednesday September 22nd, Kevin Curtis inducted a Guitar Hero: Warriors of Rock guitar, which is the first ever gaming guitar to be inducted into a hard rock hall of fame.

He unveiled the guitar at the legendary Hard Rock “Vault” in London’s Hard Rock Cafe which was framed and signed by the game’s narrator; living rock legend and KISS co-founder Gene Simmons.

Kevin Curtis was given the honor of inducting the guitar into the hall of fame because of his history of work with Gene Simmons and KISS. Kevin’s work has included making pyrotechnics for the KISS legendary Alive 35! European Tour of 2008 while working at Le Maitre Ltd (Europe’s largest pyrotechnics company). He also appeared on ‘Rock School’ Gene Simmons hit UK TV program on channel 4 in the autumn of 2005 and assists in moderating the largest UK KISS fansite www.kissinuk.com. Kevin Curtis is a professional pyrotechnician & BSc Computing Graphics & Visualization student who is currently launching a career in gaming in the area of 3D environments.

The guitar was inducted into the hall of fame for Gene Simmons of KISS and the biggest game developer and publisher in the world 'Activision.’

The induction of the first gaming guitar into the hard rock hall of fame was a historic ‘milestone’ moment for the gaming industry and a huge high profile worldwide event that gathered mass media attention worldwide. –by CelebrityAccess Staff Writers