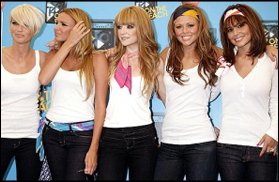 LONDON (VIP-NEWS) — Girls Aloud have quashed rumours they are splitting by promising their most spectacular tour yet.

The five-piece insist they all remain committed to the group and have vowed to wow fans on their 'Tangled Up Tourâ€™, which begins in Belfast, Northern Ireland, on May 3.

'Weâ€™re going to concentrate on doing live stuff while weâ€™re still fresh from the tour. Over the years it gets bigger and more elaborate.'

Last week, it was reported Cheryl Cole was planning to work with top producer T2 in a bid to forge a solo career. However, Sarah insists the band is more united than ever after agreeing to play the main stage at the V Festival in August.

She added to Britainâ€™s Daily Star newspaper: 'I think the main stage is for Radiohead and more legendary acts on the big stage. Itâ€™s incredible for us to get on there.'

The V Festival takes place at Hylands Park, Chelmsford, and Weston Park, Staffordshire, from August 16-17. The 'Tangled Up Tourâ€™ will visit 24 arenas across the UK, ending at Birminghamâ€™s National Exhibition Centre on June 4.