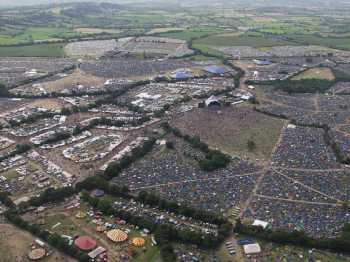 The Glastonbury Festival has opened its gates to the public, after organiser Michael Eavis called it the event's "make or break" festival. More than 15,000 people had already set up camp at the festival, held on Mr. Eavis's dairy farm near the Somerset village of Pilton, by Wednesday afternoon.

Over 150,000 people – including artists and staff – will be on site when it starts on Friday, when REM are due to headline its main stage.

Mr. Eavis told BBC News Online this week he felt it was the "last chance" for the festival to improve relations with its neighbours after trouble getting a licence from his local council.

Glastonbury was finally granted a licence in February after being initially denied one by Mendip District Council because of concerns about crime and environmental damage in nearby villages.

Mr. Eavis's licence was granted on the condition he spent more on security, recruited a villages liaison manager and installed more security around the festival site.

Last year saw the erection of a £1m "superfence" to keep out fans without tickets, after thousands jumped the fence at the 2000 event.

In recent years over-crowding caused by people who have got in to the Glastonbury site for free – has been one of the festival's biggest criticisms.

For the second year Mr. Eavis has warned people who have not bought tickets to stay away from the festival site.

Police also appealed for ticketless fans to stay away from the local area.

Chief Superintendent Mark Thompson, of the Avon and Somerset force, said: "If you have not got a ticket there is no point in coming to the festival. If people choose to buy a ticket from a tout they run the risk of it being a forgery."

Glastonbury organisers this year set up a website where tickets could sell unwanted tickets at face value in an effort to beat ticket touts. A three-day weekend pass to the event costs £105.

Tickets were still being sold on internet auction site eBay on Wednesday, with several pairs of tickets reaching bids of £310.

The 25th Glastonbury will feature Radiohead and dance star Moby as well as REM as headliners on the main stage.

Radiohead are returning to Glastonbury after a 1997 performance that Mr. Eavis says was his favourite set in the festival's history. REM also headlined the event in 1999.

Mr. Eavis has decided not to feature any harder rock bands because of safety concerns over "moshing" – violent dancing close to the stage.