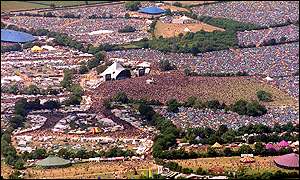 The organizers of the GLASTONBURY FESTIVAL have withdrawn their license application for the 2002 event after local police raised concerns about "public safety," according to nme.com.

Glastonbury boss Michael Eavis was due to present a formal application for an entertainment license for next year's festival on November 29th, at a meeting of the local Mendip District Council. However, that meeting was postponed while Eavis reassesses his application following concerns raised by local police.

A statement on the official festival website, www.glastonburyfestivals.co.uk, maintains that the application is a "delicate process", and organizers don't want to take any chances so not to "risk the long-term future of the festival". The application will now be re-submitted before the end of December.

A spokesperson for Avon and Somerset Police, while maintaining that the final decision rests with the council, told NME.COM that they were unhappy with the license application as it stood on "public safety grounds".

A statement issued reads: "Avon and Somerset Police is a statutory consultant in the licensing process but it is a decision for Mendip District Council to make. We have participated in the discussions over the last 17 months in terms of planning for the festival. We felt we needed to object due to concerns in this application over public safety".

Eavis has previously said that he wants to increase the capacity of next year's event to help fund a major upgrade in security. There was no Glastonbury in 2000 because of concerns over the amount of people gaining attendance for free.

Acts rumored to be set to appear at next year's festival include Neil Young and Rod Stewart.