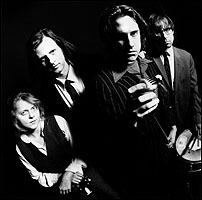 DETROIT (CelebrityAccess MediaWire) — Punk icon Larissa Strickland has passed away of an apparent overdose of the prescription drug Xanex. She was 46.

Strickland was best known for her work as the guitarist for Detroit band Laughing Hyena and the Detroit version of L-Seven. – CelebrityAccess Staff Writers.

Her label, Touch and Go released the following statement on their website:

Larissa Stolarchuk…you will be missed
It is with a very heavy heart that I am writing this notice that Larissa Stolarchuck (aka Larissa Strickland) has passed away. Larissa sang in the early eighties Detroit band, L-Seven, and went on to play guitar in the Laughing Hyenas – both Touch and Go bands. L-Seven were years ahead of their time and certainly the most talented musicians in the early Detroit punk scene. But it was as the guitarist in the Laughing Hyenas that Larissa is most commonly known. Formed in 1985 and lasting for a decade, they were raw and ferocious and real. In the Laughing Hyenas, Larissa blazed her own trail and paved the way for the growing numbers of talented women in real rock bands in the ‘90s and ‘00s. To this day, the Laughing Hyenas are regularly cited by other great bands as being an influence.

As well as being a driving force in both of her bands, Larissa was one of my oldest friends. She was the first real punk I met as an impressionable teenager in Toledo, Ohio in 1980. She lived in Detroit, printed her own fanzine (Anonymous), and sang in L-Seven. She had an undeniable vibrancy and energy that was all her own. I looked up to her and was honored to be her friend and to be involved with both of her bands. I will never forget her. My condolences to all her family and friends who knew and loved her.