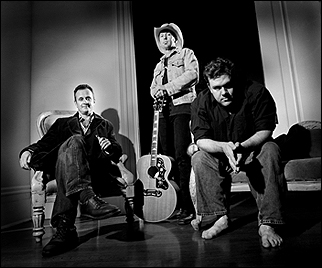 (CelebrityAccess MediaWire) — The band has been described as “pure New Orleans rock n' roll with more hooks and melodies then gumbo has spices and lyrics that bring you right into a hot steamy night in the French Quarter.”

That could explain why it’s so tough being Cowboy Mouth when their home-city is under siege by Mother Nature. But when the going got tough, the rock’n’rollers got moving.

“At the time of the hurricane, we had just started taking a break from our tour to record in Atlanta,” frontman Fred LeBlanc told CelebrityAccess. “When all of that went down, it didn’t make any sense to try to go home to New Orleans. So we got back out on the road to do what we could to help.”

LeBlanc said so far, they know that guitarist Paul Sanchez lost his home to the storm, and “my house is up to at least the second story in water right now.”

After making sure friends and family had made it out of the city safely, the band had to figure out what to do next.

“It’s kind of weird to not have a city to go home to,” says LeBlanc, “so we decided to stay on the road to spread the word of what’s happening in New Orleans in a positive way.”

With the help of agent Kevin Daly at Monterey International, Cowboy Mouth was able to make a new home out of their tour bus and a new mission out of their cause.

“What we did was organize three benefits with Harrah’s immediately, where we will donate all of the proceeds,” Daly told CelebrityAccess. “For a few private events that would have otherwise been cancelled, the buyers came to the table and rescheduled, allowing the guys to keep moving. An upcoming concert at LSU, for instance, is already rescheduled for November 25th.

“Other benefits are in the works as well, including a tentative 5-night run at the Windjammer in Isle of Palms, South Carolina, which has always been like a second home to the band. The people at the Rock Boat, which was supposed to take off from New Orleans at the end of September, are also looking to set up a benefit around the same time,” Daly continues.

The band set up a Hurricane Katrina relief fund, collecting money and supplies to help those most in need, and began working with Harrah’s, who’s locations include hard-hit New Orleans and Biloxi, Mississippi, casinos. Cowboy Mouth will be playing benefits at Harrah’s Resorts in St. Louis, Kansas City and Council Bluffs, Iowa, on September 15th, 17th, and 18th, donating 100% of the profits.

“Every stop, we’ve been collecting money for the Red Cross, and the fans have just been great,” says LeBlanc. “People have been so generous with donations, and are even offering us places to stay, money, and food.

“We’ve always started all our shows by saying, ‘Hello, we’re called Cowboy Mouth, we’re from the great city of New Orleans, Louisiana,” he continues. “Our job has always been to keep people happy; keep people smiling, dancing, whatever. So we’re just gonna keep going out and putting on a kick ass rock show every night. People need this good feeling while dealing this all of this.”

LeBlanc feels its his duty to give this back to the city that has given him so much throughout his life and his attitude shows how much the band’s fanbase has helped him get through it all.

“The support from the crowd each night is incredible, so right now the road is the best place for us to make our home.”

Daly is doing everything he can to keep the band busy and their cause in the spotlight.

“The band just wants to make sure people know that they want to help as much as possible,” he says. “I’m just trying to fill in the blanks and keep them on tour indefinitely…at least until they can get home and record.

“We could not have kept this going without our friends in the industry,” Daly continues. “The people at the House of Blues have really helped the band get some publicity, Danny Zelisko helped get the word through Clear Channel, and so many promoters that have been longtime friends of the band are really helping to put this all together.”

For a band that normally plays over 200 of their raucous country-rockin’ shows per year, the rigorous schedule is the best option in their eyes. Cake magazine described their live set best when they wrote, “…on a bad night they’ll tear the roof off the joint and on a good night they’ll save your soul.”

At a time when Cowboy Mouth could have been looking at the largest string of cancellations they’d ever experience, a lot of help from a lot of people has really saved the day. And to be able to dedicate the time to such a worthy cause, makes it all worth it for the band.

“We’re just happy we can do this to help out the relief efforts,” says LeBlanc. “Anything we can do for New Orleans works for us.” –by CelebrityAccess Staff Writers


For more information or to discuss possible benefit or touring opportunities with Cowboy Mouth, please contact Kevin Daly at 831-625-6300 or at kevin@montereyinternational.net.