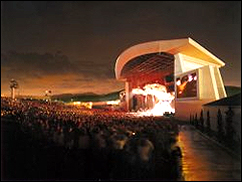 DENVER, CO (CelebrityAccess MediaWire) — Following yesterday’s announcement that Live Nation is purchasing House of Blues, Inc. for $350 million, speculation ran rampant throughout the industry regarding the closing of certain HOB offices and venues across the nation. One such venue, that looks to stand little chance of survival, is Denver’s Coors Amphitheatre.

As the music industry downsizes, large sheds, such as Coors, have struggled to fill seats. In the Denver area, many acts prefer to play the legendary Red Rocks over Coors.

With several shows already sold out and a yet-to-be-announced Tool show expected to sell well, according to the Rocky Mountain News, Coors is having one of its better seasons. Despite that, the amphitheater is still dark on most nights.

“I could see the place going away, which would be good for the market,” Doug Kauffman, of Nobody In Particular Presents, told the paper. “All the shows at (Coors) are just forced over there. This Tool thing is a perfect example. That’s the wrong venue for that band. Two nights at Red Rocks is the play.”

Coors Amphitheatre is owned by the Music of Outdoor Arts, which has a lease with HOB with several years to run. Cynthia Madden Leitner, president of the museum, told the paper, “of course it will stay open.”

But she admitted that things could change: “This just transpired and we haven’t had that discussion. House of Blues is still our tenant.” –by CelebrityAccess Staff Writers