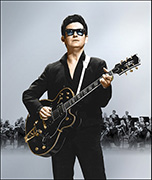 LONDON (CelebrityAccess) — If you always wanted to see the legendary Roy Orbison in concert but never got the chance, you may be in luck, provided you don't mind the slightly macabre 'smoke and mirrors' version of the late artist.

Orbison will be the recreated on stage in holographic form as part of a tour of the UK that features support from the Royal Philharmonic Concert Orchestra.

The Roy Orbison In Dreams: The Hologram UK Tour will launch in April 2018 and attempt to recreate the Rock and Roll hall of famer with smoke and mirrors as his digital doppelganger performs a selection of his hits while accompanied by a live symphony orchestra.

Alex Orbison, President Roy Orbison Music said “My Dad was one of the first people to combine rock and roll with orchestral sound so to see the full meal deal of having the big orchestra with my Dad is really a dream set up.”

Danny Betesh, founder and MD Kennedy Street and Promoter Roy Orbison In Dreams The Hologram UK Tour and who originally promoted shows with Roy in the 1960s added, “I’ve been working with artists and live shows since the 60s and it’s immensely exciting to see Roy back on the stage in such a modern and creative way. His music never went away and now fans can enjoy seeing the live show and hearing all those much loved songs.”

In support of the tour, Sony Music is planning to re-release Orbison's album ‘A Love So Beautiful: Roy Orbison with the Royal Philharmonic Orchestra’ in November.