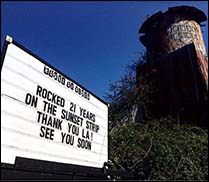 LOS ANGELES (CelebrityAccess) — The House of Blues announced plans to move from their longtime home at Disney to new digs at the nearby Anaheim GardenWalk mall by summer 2016.

The music hall and restaurant, one of HoB's flagship locations, will move into a the much larger space that is currently occupied by the UltraLuxe Cinemas.

“After 15 years, the number of fans wanting to attend our shows has grown beyond the venue’s capacity, so we’re excited to now move to Anaheim GardenWalk and expand both our show and guest services while maintaining the intimate atmosphere that we’re famous for,” Felix Mussenden, executive vice president for House of Blues Entertainment, said in a statement.

HoB has been an anchor for Downtown Disney, a retail area next to the theme park, since the music hall opened in 2001. – Staff Writers