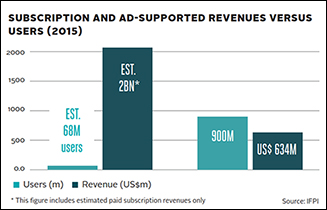 (Hypebot) – After 20 years of almost constant decline, global music industry revenue was up 3.2% last year, according to a report released today by the trade association IFPI. Leading the shift was explosive growth in streaming music revenue.

The IFPI Global Music Report 2016 reported a 10.2% rise in digital revenues to $6.7 billion, with the 45.2% rise in streaming revenue more than offsetting the decline in downloads and physical formats. Digital revenues now account for more than half the recorded music market in 19 markets.

The report cites a "fundamental weakness" underlying the industry recovery. While music is now being consumed at record levels, it is not returning a fair remuneration to artists and record labels, according to the IFPI.

"After two decades of almost uninterrupted decline, 2015 witnessed key milestones for recorded music: measurable revenue growth globally; consumption of music exploding everywhere; and digital revenues overtaking income from physical formats for the first time," said IFPI Chief Executive Frances Moore in a statement accompanying the report. "They reflect an industry that has adapted to the digital age and emerged stronger and smarter."

"This should be great news for music creators, investors and consumers. But there is good reason why the celebrations are muted: it is simply that the revenues, vital in funding future investment, are not being fairly returned to rights holders," he continued. "The message is clear and it comes from a united music community: the value gap is the biggest constraint to revenue growth for artists, record labels and all music rights holders."

Who Is To Blame?

User uploaded services like YouTube draw the most fire from the IFPI. Such services pay artificially low rates, according to the IFPI, and claim protection because of 'safe harbor' rules in both the US and Europe.

The group clams that these rules, which give immunity from copyright violation because users post music and video themselves, are being misapplied: "They were intended to protect truly passive online intermediaries from copyright liability. They were not designed to exempt companies that actively engage in the distribution of music online from playing by the same rules as other online music services."

"The effect is a distorted market, unfair competition and artists and labels deprived of a fair return for their work," the report concludes.