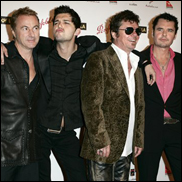 SYDNEY (VIP-NEWS) — INXS have announced their departure from touring after 35 years.


The Australian band have released 12 albums, sold more than 30 million records and toured the world.


Drummer Jon Farriss told fans at a concert at Perth Arena with Matchbox Twenty on Sunday night that it would be their last.


"We understand that this must come as a blow to everybody, but all things must eventually come to an end," he said in a statement released on Tuesday.


Making their exit in the city in which they started out in 1977, the statement added: "We have been performing as a band for 35 years, it's time to step away from the touring arena.


"Our music will of course live on and we will always be a part of that."


They honored their charismatic frontman, Michael Hutchence, who died in 1997 at the height of the global rock band's fame in the 1990s.


"Unbelievably it's been 15 years since we lost Michael", said Jon Farriss on their official site.


"We lived for each other in the trenches and we loved each other.


"It was the six of us against the world and then suddenly, and inexplicably, we were but five. We were lost right at the moment we were on top."


Dealing with Hutchence's suicide was a struggle and Andrew Farriss explained what kept them going.


"We never took a soft option," he said, "It was the adversity, the challenge and the struggle that forged us into the live working band we became.


"And this was as big as it could possibly get when it came to a challenge and in the end we decided for a whole bunch of reasons to march forward. To us there was no other option, families always move forward."


In 2000 they played their first show with Jon Stevens on vocals and went on to launch US TV series INXS Rock Star in 2005, in which they searched 20 cities across six continents to find a frontman.


Canadian-born singer JD Fortune was chosen as the new lead singer for their eleventh album Switch and to front the following world tour.


Terence Trent D'Arby also took to the microphone, while Irish vocalist Ciaran Gribbin was the last INXS singer in the role.


In 1987 they released their breakthrough album Kick, which has sold more than 10 million copies.


During the past three years they have continued to tour and entice new audiences.


Paloma Faith recently covered their notable track Never Tear Us Apart featured in an advert for a large department store chain. –According to BBC