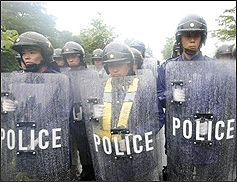 TOKYO (CelebrityAccess MediaWire) — Japan's High-tech Crime Control Office nabbed its first suspect with a p2p surveillance system that was deployed in January to monitor illicit trading of copyrighted material over the 'net.

According to the Hollywood Reporter, a 62-year-old man has been arrested in Shizuoka and has subsequently confessed to uploading more than 500 movies, including 'Avatar', in the past four years.

It is worth noting that Japan has extremely high conviction rates for crime, largely based on confessions. Japanese have a cultural expectation that suspects confess to crimes and Japanese police are permitted to hold suspects for weeks or even months while obtaining such a confession.