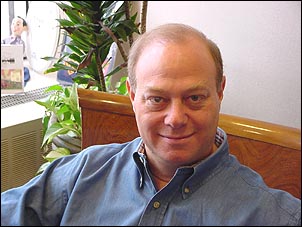 Co-CEOs John Scher and Al Cafaro have reconfigured Metropolitan Talent into a full-service company that can offer artists the ability to foster relationships in many areas and ultimately provide more focused career development. The two music industry veterans are confident that with the company's success, their new business model will prove a competitive advantage. With multiple divisions (Hybrid Recordings, artist management, touring and concert promotion, theater and television production), Scher and Cafaro believe that Metropolitan is uniquely positioned to provide artists with the full service and multiple opportunities their careers require.

"Today, record companies just focus on selling records. We're out to develop careers," says Scher. "Our artists will make money, whether they sell many records, or fewer, when coupled with proper touring, merchandising and endorsements. In the long term, they will have a career."

This expanded potential coincides with new developments within the company itself. Due to a recent court ruling, the company can now return to promoting concerts and tours. Also, formerly distributed by Atlantic Records, Hybrid Recordings, which has seen success with such projects as the film soundtrack to "Hedwig and the Angry Inch" and the emergence of Guster, has a new worldwide distribution agreement with Sony Music Entertainment. In the U.S. and Canada, all albums will be distributed by RED, and outside North America by Sony Music International.

Metropolitan Talent has adopted a business model that will give artists more creative freedom and a legitimate partnership. Artists will have greater involvement in all decision-making and be able to take advantage of the multi-faceted company's many divisions, or opt for a more traditional straightforward arrangement with only one of Metropolitan's divisions.

According to Cafaro, "We want to help artists have a career that provides a livelihood for a lifetime. We believe that our experience in many facets of the business will help them realize their dreams."

The financial structure of artists working with Metropolitan Talent will be based on partnership and transparency. "All of our artist relationships will be based on mutual approval of spending, " says Scher. "On that basis, we will be able to develop a business relationship that is a true partnership." Since everything will, for the most part, be housed under one entity, Metropolitan will offer a fifty percent split of the net profits in exchange for sharing in that expanded revenue base.

"It's a new model in that we'll still be taking the financial risks to launch an artist, but by using all of our assets to develop opportunities, and then sharing in those additional revenue streams, the risk-to-reward relationship is a great deal more honest," says Scher.

Scher and Cafaro have reconfigured their company with one thought in mind: how to address the ills of an industry. In the process, the pair have put together a team of industry experts that will help bring their philosophy into the future.

Cafaro and Scher, both industry veterans, have been a part of many successful careers and events. Cafaro, as CEO of A &M Records, worked closely with Sheryl Crow, Sting, Blues Traveler, Soundgarden, Bryan Adams, and Jonny Lang, among others. John Scher started his own concert promotion and talent management business in the 1970s. His company, Metropolitan Entertainment Group, became one of the most important national live entertainment companies, earning several major magazine's Promoter of the Year awards. In addition to producing concerts throughout the Northeast and managing clients, Scher has worked on a number of national tours, including the Grateful Dead (for over two decades), the Family Values tour, Sarah Brightman and the Furthur Fest.

"When I first started," says Scher, "some of the most powerful drivers of the entertainment industry were small entrepreneurial labels like Island, Chrysalis and A&M Records. These labels were breeding grounds for tremendous talent. However, they weren't just focused on the recorded front. The artists had long-standing careers that were carefully nurtured in multiple areas, including touring, merchandising/imaging and publishing. This was the key to the long term success of the artist and the label."

"Essentially, what we can offer," adds Cafaro, "is the expertise in all aspects of an artist's career to create opportunity, whether it's creating national tours, PBS, network or cable specials, theatrical productions, or producing iconic events, such as Woodstock. Any such projects can result in best-selling CDs and DVDs that will enhance our clients' careers. This way, we will use all of our assets to market our artists."

"Al Cafaro and John Scher have put together what I think is the new business model," commented RED president Ken Antonelli. "Their ability to market their artists on many different levels' through concert promotion, management and label representation gives them a distinct edge. And, working with two legends in the industry like Al and John is something we'd always be excited about. Together with RED's resources, we believe they will represent the company of the future."

Hybrid will have a strategic relationship with the Forester Bros., an LA based production/management/marketing company and will pursue the joint release of AB, a new singer/songwriter.

Artist Management: In the past, Scher and Metropolitan has led such diverse artists as the Allman Brothers Band, the Cranberries, Lou Reed, Lucinda Williams and Los Lobos. It will be led by Doug Thaler, together with Bridget Nolan, Julie Steeg, and Kristen Hill. This division currently represents Art Garfunkel (Manhattan Records), Grateful Dead's Bob Weir, and his band Ratdog (in association with Cameron Sears), Vertical Horizon (RCA) and Nine Days (Epic). Their latest signings include pianist/vocalist Bruce Hornsby, and two newer artists: Matthew Ryan, who will be releasing his Hybrid debut record this summer and DrugMoney, who hail from Asheville, NC, and are being co-managed by Metropolitan, with Leslie Aldridge, and will release their next album on Hybrid.

Concert and Touring Division: With the March 14, 2003 ruling of the US District Court for the District of New Jersey ordering that Clear Channel Entertainment cannot interfere with Scher's ability to promote concerts, the doors have opened for Metropolitan Talent to fully reenter the concert promotion business, thus enabling Scher and Cafaro to complete their unique new business plan. Headed by senior producer, Ian Noble, Metropolitan Talents Concert Division will focus on growing acts through strategic performing opportunities and national touring, using local promoters as marketing partners. Scher/Metropolitan has received numerous Concert Promoter of the Year awards, and holds the box office record for the biggest grossing single concert in history, Woodstock 1999. Metropolitan Talent have signed on as the national tour producers for "Raise The Rafters – Songs, Music and Dance from the Real Ireland," which will feature vintage Irish artists like Finbar Furey, Dolores Keane, Liam O'Connor, and Aisling Drennan and the National Dance Company of Ireland. Their fall 2003 tour will be preceded by a U.S. television special.

Broadway and Television: Past projects spearheaded by Metropolitan include PBS specials like "My Favorite Broadway," starring Julie Andrews and "A Tribute to Muddy Waters: King of the Blues," as well as other television network specials like "Elvis: The Tribute" on ABC and "Woodstock '99" on FOX. Theatrical presentations include "Victor Victoria," "Jelly¹s Last Jam," "Damn Yankees," and "Thwack."

Currently, there are a number of theatrical projects in the works written by, or about contemporary musical icons.