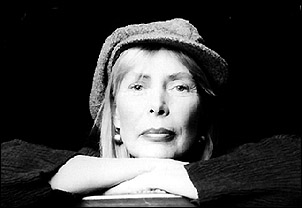 According to BBC, veteran singer-songwriter Joni Mitchell has hit out at the music industry, saying she is "ashamed" to be part of it.

The 58-year-old folk rock artist, who releases her new album Travelogue next month, told American magazine Rolling Stone that she may stop recording altogether. "I just think it's a cesspool," Mitchell said of the music business.

"I would never take another deal in the record business, which means I may not record again, or I have to figure out a way to sell over the internet or do something else."

Mitchell also hit out at MTV, complaining that her three-year-old granddaughter is already imitating dance moves she sees from the videos shown on the music channel.

"It's tragic what MTV has done to the world," Mitchell said.

The Canadian artist is known for her outspoken opinions and has in the past described contemporary music as "appallingly sick, with boring chord movement and bad acting."

And holding up Bob Dylan and herself as the standard for songwriting, she has slated Sting, Alanis Morissette and Sheryl Crow, all of whom have admitted to being big fans of hers.

The musician, once described by her friend David Crosby as being "about as humble as Mussolini," has also attacked David Geffen, the head of her former label Geffen Records.

She accused him of never paying her any royalties.

Mr Geffen responded by saying that her albums never sold enough copies to cover the advance payments she received from him.

Mitchell, who was born Roberta Joan Anderson, is one of the most respected artists of her generation, with a career in the industry spanning 35 years.

Her biggest hit in the UK was Big Yellow Taxi, which reached number 11 in 1970. Her albums include 1971's Blue and the jazz-influenced Court And Spark, released in 1974.