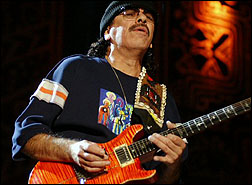 ALBUQUERQUE, NM (AP) Carlos Santana would like to help heal a wounded world. That's what his new CD, "Shaman," is about.

"Shamans heal with music and herbs," he says. "You have Buddha, Krishna, Allah, Rama, Jehovah … they all want unity and harmony on this planet, all of them. That's the message: unity and harmony and transform your fear."

The followup to Santana's hugely successful "Supernatural," "Shaman" due out Tuesday (Oct. 22) is one of the year's most anticipated albums. Like its predecessor, which won nine Grammys and sold 25 million copies, it's loaded with guest artists and a blend of musical styles.

In the 40-plus years since Santana played mariachi as a boy in Mexico, he has built a style that weaves such varied elements and makes them distinctively his.

His openness to such collaboration evolved through a spiritual process, he says, some of it coming to him in 1997 or 1998 after the death of his father, a violinist.

As a boy, Carlos had first wanted to play saxophone, but taking up the guitar could hardly be called a mistake. Nor could his move as a teenager to San Francisco, where he and his wife of many years still live. They have three children.

In the 1960s, the Bay Area offered every kind of music, and promoter Bill Graham's Fillmore West, which put much of it onstage, was more than a music Mecca.

"This was my alma mater, man. Fillmore West is where I learned to articulate," Santana said in an interview in Albuquerque during his "Shaman" tour.

"You're being taught multidimensional, intergalactic music," he says.

"I used to get headaches listening to Coltrane's music because my brain was thinking: How and where is one?" Santana says, admitting he's still a little intimidated by jazz. It's the ocean, he said, and "I hang around a lake. The ocean's too deep for me."

But now and then he breathes salt air into his music.

Clive Davis, who signed Santana to his first record deal with Columbia back in 1969, re teamed with him on Arista's "Supernatural," bringing Santana to a new generation of fans after years out of the limelight.

They used the same blueprint on "Shaman," and hope to prove that "Supernatural" was no fluke, says Davis, one of three executive producers on the album, with Santana and Antonio "L.A." Reid.

"We never expected this thing would explode the way it did," Davis says by phone from New York. The prospect of repeating "Supernatural's" success is "even more daunting."

Back on Santana's early hit album "Abraxas," in 1970, which featured "Oye, Como Va" and "Black Magic Woman," Davis says, "Carlos was young. He was fiery. His guitar blazed. He was dazzling."

Now, Davis says, "his guitar still dazzles. I think he has grown as a human being. He is very inspirational. He combines his passion for music with a very spiritualist philosophy of humanistic principles."

If "Shaman" can repeat "Supernatural's" success, Davis says, it would show that "music can transcend age boundaries and perpetuate careers."

Santana, 55, also wants to show that music can transcend international borders he cites the work of Harry Belafonte, Louis Armstrong and Dizzy Gillespie as good-will ambassadors, and says he would like to travel to Africa someday with musicians to help the poor and spiritual divides.

"This new message with 'Shaman' is to invite people to embrace their divinity."

Santana recalls lecturing at a music school in Boston.

"They started asking me all these questions, and I said, all I know is that in one note you're supposed to put five things in it soul, heart, mind, body, cojones. One note. If you don't put those five things in that note, I don't care how much music you know, man, I'm not going to feel it. … We're on this planet. Make me feel human. Make me feel spirit. Make me feel sacredly and sensually divine."