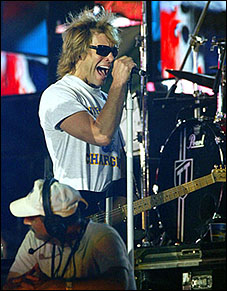 London (AP) More than a million music fans around the world have watched the Internet broadcast of a Bon Jovi concert in London that kicked off the group's latest tour, organizers said Wednesday.

The Sept. 18 concert at the Shepherd's Bush Empire, Bon Jovi's first European club performance in a decade, showcased material from their new album, "Bounce," and previous hits such as "Living On A Prayer," "Keep The Faith," and "It's My Life."

A global audience of more than 375,000 viewed a live Web cast of the gig, but hundreds of thousands have since watched a recording, which remains available until Friday.

That's far fewer than actually spent money on "Bounce." The album sold about 160,000 copies during its first week in stores in the United States, according to Nielsen SoundScan figures released Wednesday.

It came in second to the Elvis Presley compilation "Elvis 30 No. 1 Hits," which has been at the top of the charts for the past three weeks and has sold more than a million copies.