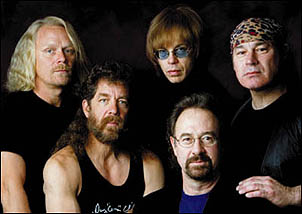 "We never really had any intention of playing in the public," says Cook, "but a
friend wanted to promote a couple of concerts. We got talked into it but
didn't
know how it would go over.
The reaction to those shows was astoundingly positive and
driven
in part by a generation of kids who weren't even born when the music came
out.
Likewise, the release of Recollection, a 22-track double CD on the
MCA/Universal distributed Fuel 2000 label, which features passionate,
authoritative versions of classic Creedence Clearwater Revival hits – was
the
result of public demand. It was generated by requests of the people who came
to
the shows, Clifford acknowledges. Over and over they would go to the
concession
stand and ask 'Do you guys have a CD?'"