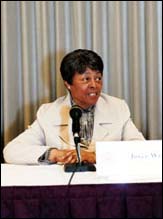 Joyce Alexander Wein was born in October 21, 1928, in Boston, Ma, the sixth of seven children of Columbia and Hayes Alexander. Her mother was the youngest of 13 children, two of whom were born into slavery. She attended Girls Latin School and at the age of 15, entered Simmons College, where she graduated with a major in chemistry in 1948 at the age of 19. After graduation, she started her career as a biochemist at Massachusetts General Hospital in Boston and later in New York at Columbia Medical School.

A founder of the New York Coalition of 100 Black Women, the forerunner of coalitions around the nation, she was been deeply involved with philanthropy and the arts. She was responsible for establishing the Joyce and George Wein Professorship Fund in African-American Studies at Boston University and recently set up the Alexander Family Endowed Scholarship Fund at Simmons College. She served on the Board of the Studio Museum in Harlem for 10 years and has partnered with her husband in amassing an important collection of paintings and drawings by African-American artists. For the past 10 years, she and her husband partnered with Kenneth and Kathryn Chenault, the CEO of American Express and his wife, to host an annual dinner for Geoffrey Canada and the Harlem Children’s Zone, raising over $500,000.