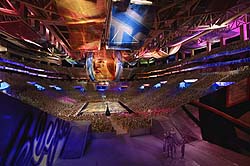 BROOKLYN, NY (CelebrityAccess MediaWire) — A federal judge has ruled against the primary argument of a lawsuit that has been brought against the Atlantic Yards, a $4 billion dollar development currently being planned for Brooklyn.

According to a report in the New York Times, the judge dismissed the central thrust of the lawsuit which focused on the condemnation of a number of existing businesses to make way for the complex, dealing a blow to the plaintiffs who argued that it was a misuse of the public domain laws.

The project, which includes a new arena for the basketball team, the New Jersey Nets as well as mixed use commercial, residential and open 'green' space, has not been without controversy. The plaintiffs asserted that the project was incidental and that the primary purpose of the project was profit for developer Forest City Ratner.

The judge sided with the defendants however, calling the assertion that the project had little public benefit to be "baseless," and stating in his written opinion that the "Plaintiffs have not set forth facts supporting a plausible claim of an unconstitutional taking. Nowhere in the amended complaint or their briefs do plaintiffs sufficiently allege any purpose to confer a private benefit."

Bruce Ratner, CEO of Forest City described the decision in a statement as "An important victory not only for Atlantic Yards but for Brooklyn as well."

Forest City has already begun to prepare the 22 acre property for construction, despite the determination of the plaintiffs to appeal the judge's ruling.

"We will continue to pursue every single legal option available to the plaintiffs, wherever they lead us, to stop what we believe is a private taking in violation of the U.S. Constitution," Candace Carponter, a lawyer with the Develop Don’t Destroy Brooklyn coalition told the Times.

In addition, there are a number of other lawsuits regarding the proposed project underway. A group of residents of rent controlled housing have lodged suit, claiming that the city's proposals to relocate them are insufficient and another group has lodged suit over the potential environmental impact of the development. – CelebrityAccess Staff Writers