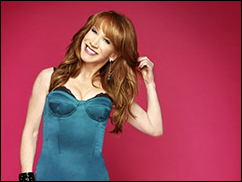 NEW YORK (CelebrityAccess) — Comedian Kathy Griffin was fired by CNN on Wednesday, after she took part in a photo shoot where was depicted holding up a bloody head resembling President Donald Trump.

"I'm a comic," she said. "I cross the line. I move the line, then I cross it. I went way too far. The image is too disturbing. I understand how it offends people. It wasn't funny. I get it," Griffin said in an apology posted to her Instagram.

"I beg for your forgiveness. I went too far. I made a mistake and I was wrong," Griffin added.

Griffin has served as the co-host for CNN's annual New Year's Eve program alongside Anderson Cooper since 2007.

The photo was taken as a part of a photo shoot for Griffin with photographer Tyler Shields, who has a history of controversial photography. Last year, Vanity Fair featured photos from Shields' 'Historical Fiction' series, which included an image of a black man hanging a KKK member.