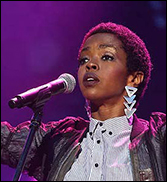 The news must be a blow to Hill's fans. The concert was planned as a makeup date for a Feb 27th concert that she canceled, again, citing scheduling conflicts.

Worse still, the Feb. 27th concert itself was a makeup date for a botched Jan 31st concert where Hill posted to the show more than three hours late, well after many fans had given up the ghost and gone home.

There is no word if Hill is planning to try another rescheduled date, or if her Pittsburgh fans would oblige her by purchasing a ticket. – Staff Writers