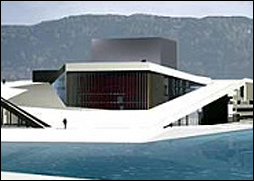 The $835m white marble landmark on the shore of the Oslo Fjord in the heart of the capital fulfils a long-held dream for local music fans.

The opera house is the largest cultural centre built in Norway in 700 years.

The Norwegian parliament's decision to approve its construction in 1999 ended more than 120 years of debate and waiting for a national opera house.

From the outside, the most striking feature is the sloping stone roof, made up of 36,000 fitted pieces, which seems to rise from the water of the fjord.

It has been described by the Norwegian architects, Snoehetta, as a "fifth wall", designed so visitors can walk up the gentle incline to the top, and look out over the city and the fjord.

The inside of the 1,000-room building has been lined with crafted woodwork and decorated with about $12m of art.

"Innermost in the Oslo Fjord, the opera house rises as a new and monumental landmark," said King Harald at the inaugural concert on Saturday evening.

"This house for many generations to come will be filled with music, dance and song."

The director of Norwegian Opera & Ballet, Bjoern Simonsen, said the building would "change the way the world sees us, and the way we see ourselves", according to BBC